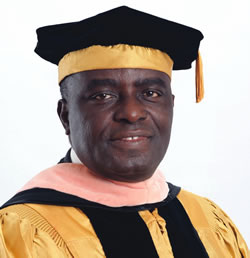 I had my higher education at the University of Ibadan, Nigeria’s premier university, where I obtained the Bachelor’s degree in 1973 followed by Master’s and Ph.D degrees in Science Education from the same university. I followed up with specialised training at the Massachusetts Institute of Technology (M.I.T.), and Harvard University. I specialize in science, computer and environmental education.

One of the defining moments in my professional life was joining NARST in 1983. The vista for intellectual growth opened more widely. For 29 years, NARST afforded me the opportunity of productive interaction with colleagues from all over the world. It stimulated the honing of my research skills and provided an avenue for collaboration in researching problems and challenges facing science education with a view to devising strategies to better deliver quality science, technology and mathematics education.

Between 1994 and 1997, I served on the Editorial Board of the Journal of Research in Science Teaching. I was also the contributing Editor for West Africa for Science Education. At numerous times from 1987 to date, I serve(d) as Editor or member of the editorial board of several national and international journals in science, computer, and environmental education.

Between 1997 and 2000, duty called at a higher level in NARST when I was elected on the Board of Directors. As a member of the NARST Board, I was the Chairman of the International Committee. My term in office witnessed a spurt of growth of international membership, and more importantly in the virility of the Committee through initiatives such as the linkage with international science education organizations. UNESCO and ICASE showed up in NARST activities with more vigor.

It is also worthy of mention that my engagement in science education at all levels of the educational system has scope which has seen me serve a number of international organisations as Consultant including UNESCO, UNICEF, The World Bank and the UNDP. Since 2000, I have been the Executive President of UNESCO’s African Network for Innovations in Higher Education (GUNI-Africa). In addition, I am with modesty, noted as the First African to win the prestigious UNESCO Prize for the Communication of Science in 1993. About half of previous award winners are Nobel laureates in science. I am a Fellow of the International Academy of Education and between 1998 and 2007 was the African Representative on the Executive Committee of the International Council of Associations for Science Education. I am a Fellow and Past President of the Science Teachers Association of Nigeria as well as of the National Association for Environmental Education. I have won several international gold medals in science and computer education. Between 1990 and 1991, I was a Visiting Fellow at the Science and Mathematics Education Centre, Curtin University of Technology, Perth, Australia.

My research efforts have gravitated around five central themes – computers in education and e-learning, co-operative learning, metacognitive strategies in science education, environmental education, and eco-cultural influences on the learning of science concepts. These efforts have resulted in over 160 internationally published works and over 190 national and international conference presentations.

After a tour of administrative duties between 1992 and 1997 as Dean of Education, Deputy Vice-Chancellor, Director of Centre for Environment and Science Education and President (Ag. Vice-Chancellor) of Lagos State University, the Federal Government of Nigeria called me up for national duties. Between 2001 and 2006, I took responsibility for all 85 public and private universities in Nigeria as the Executive Secretary of the National Universities Commission. During this period, the Nigerian university system witnessed landmark reforms at bolstering quality especially of science and technology education. The reforms in quality assurance and funding are poised to bring a freshness of vision to higher education in Nigeria. These efforts are being extrapolated
for adoption in several African countries.

I am currently the Chairman of Council (Board of Regents) of Crawford University, and Director of the UNESCO Institute for African Culture and International Understanding. I have been awarded a number of honorary D.Sc degrees. I served as leader of the entire Nigerian Academic Community to the National Political Reform Conference and in 2007 I was awarded the National Honour of the Officer of the Order of the Federal Republic- OFR.